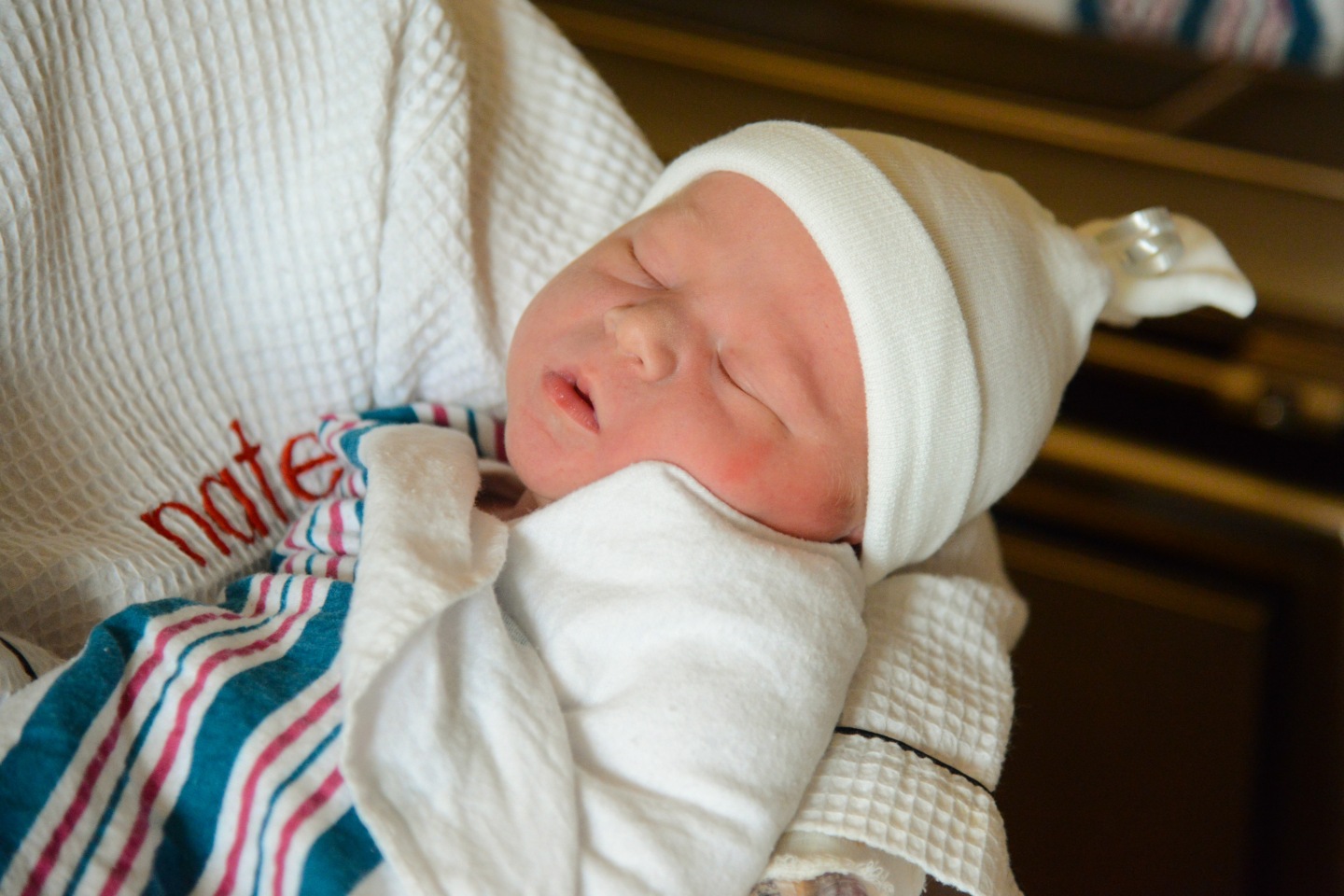 The conclusion of a two-part series about delivering my super-sized son, aka “Deuce Luce.” Sections in blue are actual notes that my husband took on his phone in the delivery room.

My hospital started inductions at night. I was hooked up to all the monitors and given a dose of Cervadil, a topical insertion that effaces the cervix while you sleep.

-dad has to remember color coding for monitor plugs, which is actually harder than he anticipated for two cords with three potential slots
-had to wait on the cervadil, doctor must place and he/she was hung up in the OR for a minute
-Nurse is Lisa, she’s nice, stressed from a busy week. M&ms nurses cap, sparkly rings.

Nate and I fell asleep in our room, still kind of afraid that we’d get kicked out because we pissed off the moon or something. We both slept uncomfortably through the night. Nate tossed and turned on a pleather couch, the resulting squeaks of which were infuriating. We both woke up cranky and I realized that he probably should have slept where he belonged: In our bed at home, with his mother.

Woke up all the time on account of my loud rustling. The couch had a farty leather sound, on top of creaky hinges. Nurses kept coming in to adjust monitor straps.

There was a window of time in the morning where I could eat breakfast and take a shower. Nate brought bagels and fruit for me from the hospital Au Bon Pain. Two babies later and we still haven’t figured out how to get normal, special occasion food into the hospital. Pale ass honey dew it was!

Dr. Davis, a doctor in my practice who I had never met, was on call. She was lovely and friendly. Then she scraped my cervix.

Finally officially rose at 9. Dr Davis let us know that pitosin would start at 10:20. She did a scrape around the cervix, which caused Julia intense discomfort and the realization that she was not ready for labor. The realization fostered dread, irritation, nervousness, and nagging. At 10:30, the pitosin started flowing.

After the Pitocin was administered (via IV-drip) and Nate was sufficiently nagged, it was just a waiting game. I was feeling fine. Sent a lot of text messages.

1:20–pitosin upped to 6 ml/HR from 4, Julia starts to feel the contractions in a significant way

Still not ringing a bell, but sure!

1:30–new nurse in, checks vitals and ups to pitosin again. Anesthesiologist has a 30-minute window, but does have a back up.

I think this is around the time we started watching “Flip or Flop” on the tiny hospital TV. We’d never watched the show before but really got sucked in. Contractions were definitely intense, but so was the real estate drama.

2:50–after multiple episodes of flip or flop, dr decides to break the water, up pitocin to 10. Now I’ll never know the fate of that high-potential rancher in North Tustin

Having my water broken was a lot better than having my cervix scraped. Dr. Davis used a very long kabob spear, an essential item in any good OB’s or grillmaster’s toolkit. It only took a couple pokes for 3,000 gallons of amniotic fluid to flow out. It felt awesome, like I was peeing after holding it for 40 years. The nurses remarked that this was a LOT of fluid. Maybe my baby wasn’t that big at all, maybe I was just carrying an insane amount of fluid. Or both? Yea, it was both.

Intense contractions continued, but now every time my uterus contracted, more fluid came out. It was cool.

3:00– we turned the tv back on. The project took longer than expected, but they pocketed 89K. We watch the next. Why isn’t Tarik reviewing the CCRs before painting the house, or making any other major cosmetic changes? Sloppy.

4:07–contractions coming in nicely, Julia declines the epidural for now

By the time the anesthesiologist arrived I was in misery. The needle went in and it hurt, a LOT. I screamed and cried. He tried another spot on my spine and my left leg started to tingle uncomfortably. I flooded with the anxious thought that he could instantly paralyze me with one misstep and I started to sob hysterically. He tried another spot and it still didn’t work. This guy was being such a Tarik! What I think was a mild panic attack, mixed with grueling contractions, with a dose of needle-in-the-spine was all a bit much. I had tears and snot pouring off my face. Nate gingerly wiped my nose with a tissue. Thankfully the nurse stepped in and wiped my nose like an irritated mother of a toddler: aggressively and without consideration of comfort. I was grateful. He tried again and the epidural was rolling.

The anesthesiologist looked harried after it was all done. There was blood everywhere and I was dry heaving. He said “Well, that was… a lot.”

5:46–after 35 minutes, the catheter for the epidural is in. A bit of a struggle getting the feed thru her back. Dr. warned that she could have a “spinal headache” in the coming days after Julia mentioned a pain in her leg, but the epidural should work great. Yay?!

In retrospect, I wish I had asked him to narrate the WHOLE process out loud. I let my imagination run wild in silence and we all suffered because of it. It’s like when a pilot announces that there’ll be turbulence, everything is cool even when bags are tumbling out of the overhead compartment. “This guy’s got this! He told us what’s up!!”

So do I regret getting the epidural? If you think I did for a second then you’ve never experienced the pure joy of being sky high after immense physical pain.

So I’m high AND I don’t have to pee on my own anymore? Heaven. I ask the nurse to cover me in as many pre-heated blankets as she could. Nate and I take a brief snooze. We’re awakened by a welcomed visitor, my original doctor from the agonizing pregnancy. She was not on call but stopped by to say hi and good luck. She told me it was going to be great.

8:17- serious labor starts, like immediately. The staff is prepared but shocked when Julia’s initial pushes are quite successful. The dr’s phone starts playing a cops video.

I’ll clarify. Doctor comes in to check on me and is shocked that I am already 10 cm dialated. She calls in for reinforcements. As she’s setting everything up for delivery, her phone starts playing the theme song from COPS. We think it was either her ringtone or it was an ad on a YouTube video that just randomly started blasting. She laughed and we laughed. Hopefully that YouTube video wasn’t “How To Deliver a Baby.”

When I was delivering Valerie, the pushing was never-ending and extremely painful. I had forgotten to re-up my epidural so it was all pretty raw and excruciating. The scene felt frantic. However, this time everything was groovy. The painkillers were flowing, the lights were low, and there were only two nurses, Nate, and the doctor in the room. I felt like I had a comfortable front row seat to the action. Pushing was very steady and progressive. Dr. Davis and I chatted away like we were at a Starbucks. She used SO much petroleum jelly I couldn’t believe it. She explained that it was the best way to get him out considering his size. A few pushes later and he was out.

He went on my chest and immediately snuggled. It was very sweet.

8:45–held his hands on the warming table.

Doctor says we can say he we was 10 pounds 3oz because he pooped when he came out, which accounted for a loss of a few ounces. I get stictched up while I get Wiley to nurse and the nurses cart away all the tarps.

9 pm onward–Wiley takes to the boob quick. The tongue rolling started quickly after the changing table. He’s giving Julia’s right nipple a go but still figuring it out

About 20 minutes after birth, they’re ready to move me to my post-natal room. As I’m getting ready to get in the wheelchair, we realize that my epidural is still flowing and has been the whole time. My legs are total tree trunks and they have to roll me onto a gurney.

Once in the room, the nurses’ priority is to get me to empty my bladder so my uterus has room to get back in shape. I can’t move any muscle below my belly button, so they have to reinsert the catheter in front of Nate and empty out all the pee manually.

My two days in the hospital were great. Wiley was a good eater and I got to eat meals and watch TV without a toddler yelling in my face. Our plan was to have Valerie and Wiley meet when we returned to the apartment, and that was our best decision to date.

Thank you Wiley for bringing so much love and tenderness into our lives. There’s no way we could’ve survived the hellscape of two children without your constant smile and laugh. WE LOVE YOU! 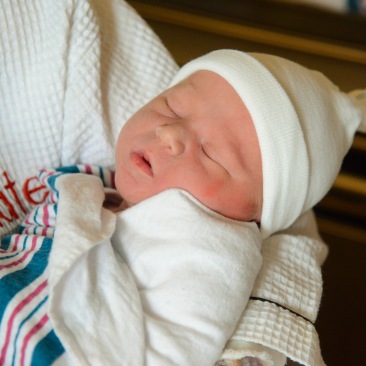