It’s true that the days immediately following a baby’s birth are chaotic, messy, and emotional. However, I’m not afraid to admit that I deeply miss that time. More specifically, I miss all the attention and the free food. It’s the only time in life when one can shoo away doting visitors with the flick of a wrist (“leave the wine at the door”), eat alternating bites from a pan of lasagna and a pan of Rice Krispie Treats, and let your jiggly belly flab flap around while friends from all over the world send you flowers, gifts, and the warmest of wishes. It’s like every day is your most hungover day, but the good kind: When your body feels like crap, but everything is goofy and it’s completely acceptable to spend all day and night eating pizza while binge watching Parks and Recreation.

Valerie was born during a spectacular East Coast fall weekend. While at times I felt as though I was missing all the outdoor delights of my favorite season, the timing was actually quite lovely. Postpartum life steamrolled into the holidays, which was like layering another blanket onto our little nest. It snowed and sleeted, but I had no place to go. I didn’t have the bandwidth for a bounty of holiday gifts, but everyone understood. I overindulged on snacks and egg nog at holiday parties, but nothing really new there. Any concerns about the future that would bubble up (we need two incomes, I should send my resume out immediately) were placed by the chimney and whisked away by Santa.

Christmas came and went with chocolate, baby candy cane outfits, and a whirlwind  of family love. Next up was New Year’s Eve, which we celebrated at our home with friends while the baby slept soundly. And then came my birthday on January 4. I’m used to my birthday being the final celebration before the Real World comes crashing down. This year’s birthday was on a Sunday, a particularly harsh blow to the end of the year and my little three month cocoon. As soon as my birthday candles are blown out, the lights come on, the blankets are ripped off, the Christmas tree and the candies get trashed, and everyone goes back to work or school. Even Toyotathon ends. This past year I hung onto my birthday for dear life. Eating my entire cake was my final act of decadence before surrendering to the ice cold reality of Monday, January 5.

This is the point where I confess something very absurd: About two months later, I started causally lying to strangers about my situation. At a very intense Pilates class, I told the instructor that I had just had a baby, so I would probably be a little less advanced than the other folks. If they asked how old my baby was, I would knock a couple month’s off of Valerie’s age. Then I’d get what I came looking for: You look amaaaaaazing! Good for you for getting back in the class so soon after giving birth! Naturally, I loved it.

Another time, I took it too far. I was running five minutes late to a hair appointment at a salon that is notorious for penalizing tardy customers with a cancelled appointment and a request for full payment. I came running through the doors in my sweatpants and started begging the receptionist to let me get my hair cut. I have a BRAND NEW BABY AT HOME and this the FIRST TIME I’ve left the house!!! The stylist greeted me promptly and said, “I’m a mom too, so I totally understand!”  Then she asked how old my baby was. (Oh God, here it comes…)

This was the youngest I had ever gone. I was spinning out of control. We talked about how hard the first few weeks are and all the crazy changes that my hair was going through (it wasn’t). And since I hadn’t played with enough fire already, I actually commented on the framed family photos that adorned her work station. I asked how old her daughter was (six), and pointed out how much I loved her outfits. Then it hit me: This woman is now going to ask to see picture of my daughter. My daughter who was currently five months old with four teeth and a firm grip on the concept of permanence. I began frantic mental preparations. I would open my iPhone’s Camera Roll and force my thumb from top to bottom as hard as I could to reach the earlier photos. But even with the heaviest, most heartfelt Wheel Fortune Showcase Showdown spin, I would only reach photos from last week. I would be completely caught in the world’s stupidest lie just so I had an excuse to wear oversized, stained sweatpants out in public, not pay full price for a nonexistent haircut, and indulge in the small amount of joyous attention showered upon me. Also, the only reason I was five minutes late in the first place was because I was coming straight from a pedicure appointment where I had asked for a five minute extension on the foot massage. I can’t imagine a situation more opposite to “I have a five week old baby at home.”

She never asked to see a picture. This is good because I was all set to go with Plan B: Point to one of the photos of her daughter and say “This. She kinda looks like this. But she’s a baby. And white.”

After that moment, I decided to ditch this act all together. Since I can’t chalk my behavior up to those “crazy” pregnancy hormones, I like to think that I was just deeply nostalgic for that absolutely magical time in my life and unsure of what being mother of a five month old actually looked like. It won’t be the same with a second baby since my older daughter will need a mother who is present, active, and doesn’t perpetually smell like salsa. 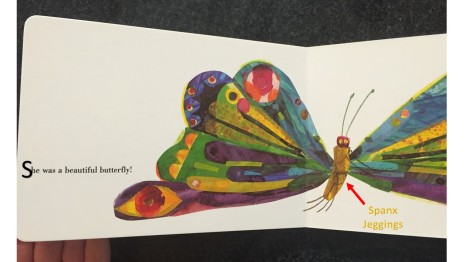 So, just to set the record straight: At time of this publishing, my firstborn child is 8.5 months old. Not all my pre-pregnancy jeans fit and everything is still very soft around the edges. I sleep well and wear makeup every day, but, as it will be for the rest of motherhood, I still don’t totally have it all down.